Transnistria
(Separatist region of the Republic of Moldova)
October 2-4, 2017 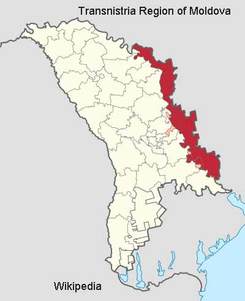 ​YOU CAN'T GOOGLE the value of a Transnistrian Ruble because the money doesn't exist, because this small strip of land on the eastern side of the Republic of Moldova, (smaller than Delaware and with a half-million people,) is not a country.

Transnistria is a very independent breakaway region of the Republic of Moldova, one with it's own currency, (the five-Rupee note sports an image of the Kvint cognac distillery,) a small army (Russian "peacekeepers,") and a life in limbo for residents.

U.S. Peace Corps volunteers in Moldova and Ukraine, (or anywhere for that matter,) are banned from visiting the region, not because of any extraordinary danger, but because the U.S. Embassy has no diplomatic relations there.

Not only the U.S., but all visitors are on their own if they get into trouble in Transnistria, (except maybe those from Russia,) as no U.N. country recognizes the region as a nation. Transnistrian residents who travel abroad hold passports from Moldova, Ukraine or Russia.

All that being said, Transnistria is a beautiful place to visit, even if only for a few hours. There is a large monastery with the largest bell tower in Moldova, (198 steps,) and one of the largest bells in Europe, (greater than eight-feet across and an estimated nine tons.) You can also tour the Kvint facility, shop and dine in modern stores and restaurants, and enjoy a vigorous nightlife.

After a civil war in the early 1990s, which tore this region from the rest of Moldova, the land has become a mysterious, almost hated place for Moldovans. Before my visit, I was cautioned more than once by Moldovans who feared for my safety, and I read reports of strict Russian Army soldiers there, and of bribes and secrecy that reminded me of North Korea.

Darmon Richter summed it up in his 2013 report on his Bohemian Blog; "I was anticipating the cowed gazes of oppressed masses trapped in an austere dictatorship," he wrote. Richter did eventually find quite the opposite in Transnistria, but he and many other visitors have reported two issues that I could not confirm during my recent visit, (Oct., 2017,) and I hope this is because things have gotten better.

I was not pressured for a bribe from the Russian soldiers, but maybe I was just lucky. While entering the region, I had befriended a Tiraspolian who commutes daily to her job in Chisinau, (the capital of Moldova,) and she whisked me through the process. Also, I spoke with a soldier at a traffic point in Bender, who helped me get on the right shuttle to Tiraspol. No bribes, no scrutiny of papers, not even a stern glance.

I also had no pushback over my camera, and though I had been warned beforehand by outsiders, I used it everywhere without issues. Of course, I didn't taunt the soldiers or even directly photograph them, (not advisable even with U.S. armed forces.)

The Transnistrian tourism office, (yes, there is one,) regrets the lack of diplomatic ties, as it makes the place less appealing for the average tourist. But they have noticed that their rebel status could make their region more desirable to those wanting a little adventure — it is tantalizing to visit a forbidden place.

​I recommend that any Peace Corps Moldova volunteer who has spent two years among people who dislike or are simply afraid of the region that broke from the family ranks decades ago, to wait until they finish their service and then visit Transnistria, where I believe they will see a beautiful, safe and clean place filled with ordinary and kind people.

Create your own unique website with customizable templates.
UA-106871761-1