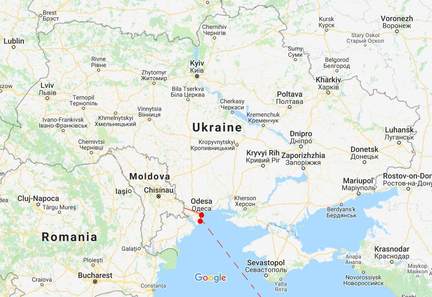 Odessa is a beautiful Ukranian city on the Black Sea. It's lousy with tourists and filled with museums, monuments, and great restaurants. It is possibly most well-known for its giant staircase called the Odessa Steps or Potemkin Stairs.

The Odessa Steps were built in 1841, and the 200 steps (now only 192) are a clever optical illusion in two ways. First, since the bottom steps are nearly twice as wide as the top ones, if you stand at the top, the staircase looks longer than it is. (Well, it doesn't have the "disappearing" perspective like you notice while looking at, say, railroad tracks.)

The stairs were the setting for "one of the most technically important films ever," some say; "Battleship Potemkin" was directed by Sergei Eisenstein and is about a ship mutiny and a massacre. Though it is not a true story (there was no such massacre there,) the filmography was groundbreaking for 1925 and is still revered by cinematographers for its action scenes.

Click here for The movie     And here, for the Wikipedia page

Create your own unique website with customizable templates.
UA-106871761-1